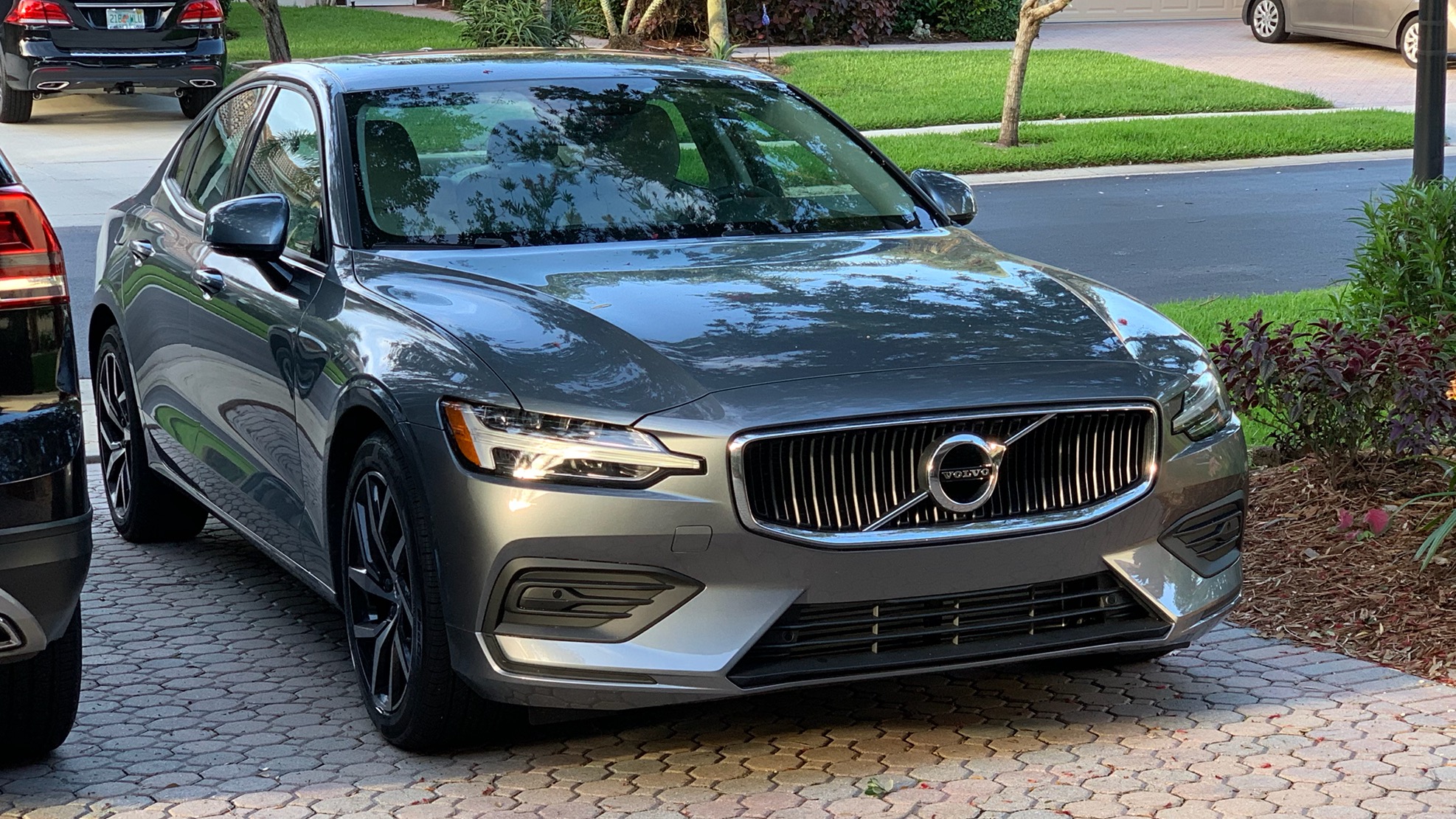 It feels like it’s been a while since I’ve reviewed a car.

And while life always seems busy, the past few months have been a whirlwind: we stumbled upon a bigger property of interest in early January and then got busy with negotiations and inspections. Before we knew it, that trip to Spain that we had locked in last year snuck up on us. We had a blast there, and enjoyed a much needed relaxing break, before getting back just a few days ahead of the closing on the new property.

Somewhere in there, we also managed to tie up the loose ended projects at our old home… and put it on the market just hours after closing on the new place.

And in the busy start to this year, picking up a new Volvo S60 was also shoehorned in.

The 2019 model year S60 is a brand new design, one I was extremely impressed by after seeing a pre-production version last December in Summerville (right down the road from the new Volvo factory). It was natural replacement for our outgoing S60, but that’s not to say we didn’t seriously weigh other available options from both Volvo and the rest of the industry.

Been waiting each day to see the first new one in person, wasn’t expecting to stumble upon a test vehicle rocking manufacturer plates literally as soon as I arrived in Summerville

Below, I’ll dive a bit deeper into the details - and also my thoughts on the major options available.

Our new S60 received more compliments on it’s styling in the first week at the office than any other I’ve owned.

Volvo’s new design language, first introduced with the 2016 XC90 and 2017 S90, was like a breath of fresh air for the automotive market. No drama, no gimmicks, just pure elegance. The designs just felt natural, and very much like products from Apple, were stripped of anything unnecessary.

When Volvo released the redesigned XC60 for 2018, I spent countless hours blabbering on to peers about how it was the most beautiful car I’d have ever seen - it was truly stunning. However, I believe the new S60 (and even more so, it’s V60 wagon counterpart), is Volvo’s best step forward with this new design language. It’s damn good. 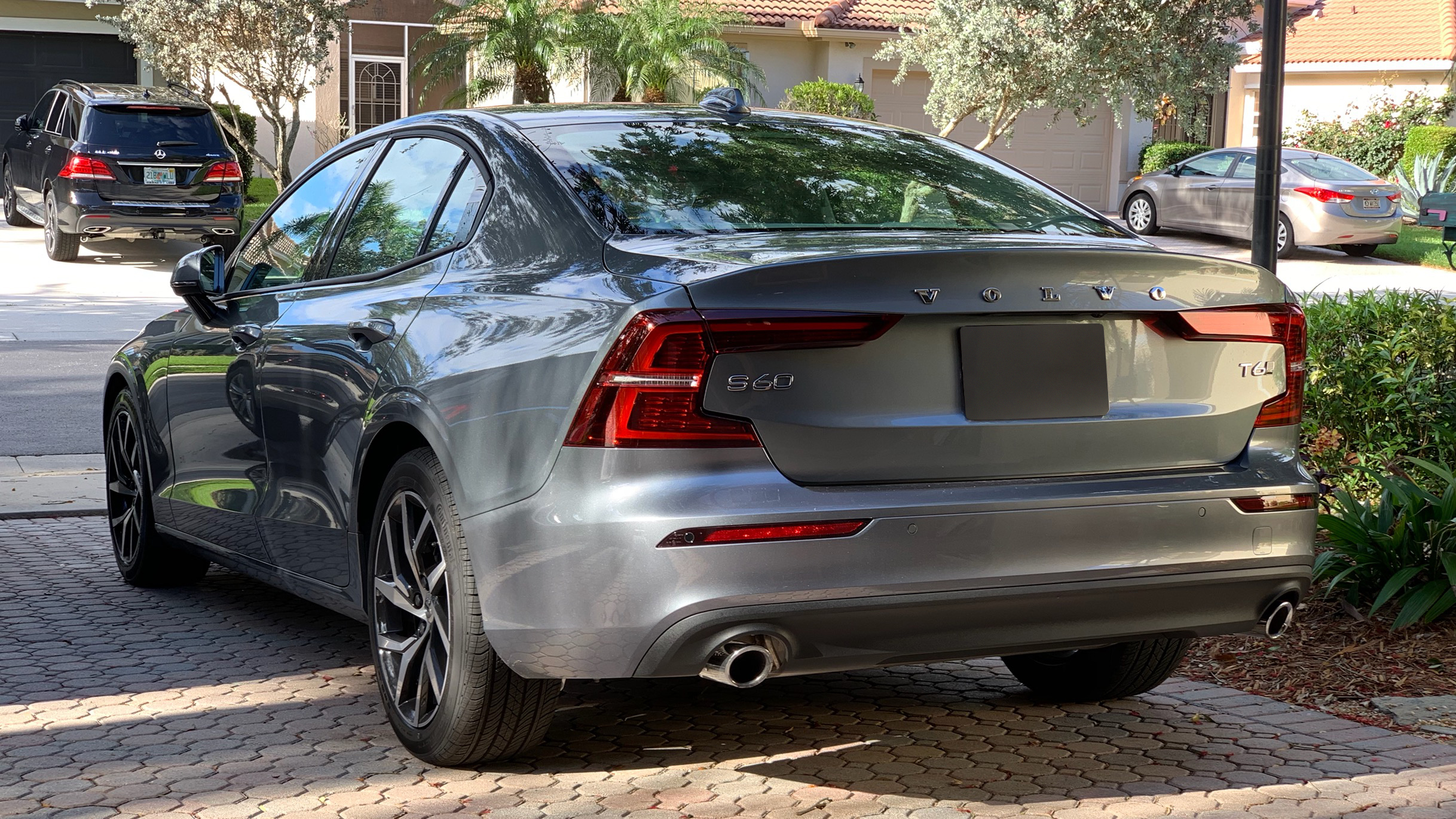 One of my favorite details is the body line over the rear wheels, as the panel is just the slightest inset (concave) - providing a feeling of lightness and precision, a katana sword on wheels. I also get a hint of 80s-retro-gone-modern in the rear three-quarter views of the vehicle.

The stance is extremely impressive from the factory, with small wheel gaps and a ride that looks lowered for most other brands. While the R-Design wheels are a masterpiece, the 5 “Y”-spoke wheels had me at hello (and perhaps are the greatest throwing-star design of wheels in history).

The car is magnificent from every angle. The extra little details really set the headlights apart from the S90, and on the opposite end the taillights just warp the body without the slightest hint of being contentious (rather instinctive).

The interior is beautiful, and it’s the the first vehicle I’ve ever considered a white interior in (considered, and selected - Donna made the right call here). The fit and finish feels like it belongs in a car much more the cost. Overall phenomenal design work that just feels essential and logical, especially when it comes to functional details like the air vents on the dashboard.

Saving the best for last: the driving position is grand, and the placement of the mirrors with the drivers line of sight is second best to Porsche 911s. It’s one of the few sedans I’ve driven which can make you feel like you are driving a coupe.

Whereas other manufacturers add gimmicks to their designs to try and keep the occupants from being bored, Volvo takes a minimalistic approach that simply delights and vanquishes distractions.

If you want fun: go with the just-turbocharged T5.

For those in the pursuit of utter excellence: the turbo-and-supercharged T6 is performance-gone-elegant.

The T5, Volvo’s 4-cylinder turbocharged engine, is outstanding. It feels very, very quick: boost builds up and it pulls away. The T6 lacks the punch, because in those moments that the T5 is waiting to build that boost, the T6 has danced away into the horizon. The nearly instant torque of the T6 is the closest I’ve seen an internal combustion engine come to feeling like an electric vehicle.

Making 158hp per liter, the T6 nearly matches the output ratio of the Bugatti Chiron, and far exceeds many supercars. Without getting too technical, it’s packing an Eaton Roots-style supercharger which electronically disengages to make way for turbocharged boost at higher RPMs.

The T6 is a gentleman’s package (no offense, ladies), meaning that you can confidently blow the doors off the sporty-whatever next to you at the lights (often enough) and do so with elegance.

The suspension on our previous S60 really impressed me: it was firm in the city, comparable to my previous 335i, but was an entirely different animal on the highway delivering a smooth ride and excellent dampening.

With our new S60: combine the extremely nimble and tight feeling with the instant torque of the T6, and getting through city streets has never been so much fun (think a slightly bigger Mini Cooper with a linear power band). The car feels like an extension of you and your thoughts, I’ve never had a vehicle that I could so precisely place in tight openings (I spent many months driving my friend Timo’s 996 C4S, and it was no match). The car inspires confidence, like a proper sport sedan should.

The amount of suspension travel in the rear did surprise me when taking corners at higher speeds (pushing the car into sweeping highway on-ramps). Perhaps this is because of how confidence inspiring the vehicle feels otherwise, that the rear end can feel a bit like a body roll from an older American sedan. But on the other hand, it presents a new fun challenge of learning just how-to get the car to carry speed through the corners while maintaining control of the weight transfer. And again, it’s not trying to be an M3.

All all fairness, our previous S60 was FWD. The car was fun to drive, and handled very well. When we started the discussion of a new S60, it was Donna who said she wanted an AWD version this time ‘round. If you want to save a few bucks, there’s nothing wrong with the FWD setup, but the AWD setup really does bring the package together in a way that makes the FWD setup feel incomplete.

While drivetrain and power packages can be fine tuned in Volvo’s other models, the T6 is only available in AWD on the S60 as of now.

From the window switches to the turn-signal stalks, the quality of the controls (including the material choices) feel well built. The only thing better would be BMW’s repeat-to-cancel-blinker-gestures, but that’s proprietary to them.

Stereo wise, while we considered the $2500 Harman Kardon package, we passed on it. While I originally found the standard stereo a little lackluster, after breaking in I’ve got to admit I’m impressed (and I need to go find that survey I filled out to apply some whiteout) - it’s not a match for the HK Logic 7 we had in the 335i, but it’s plenty for every day enjoyment.

I spent a week and half with Volvo’s bigger sedan, the S90, fitted with a T5 powerplant. While the S90, to me, is a no-brainer decision over the popular trims of 5 Series BMWs, E Class Mercedes, and A6 Audis - the S60 wins hands down. And that comes down to the smaller, more nimble form factor that’s amplified with the instant torque of our T6. The S60 feels like an extension of the driver (with you driving the machine, rather than the machine driving you).

Earlier this year, only five automotive manufacturers recorded gains. Volvo was one of those… it’s easy to see why.

While many manufacturers view the sedan category as one they need to escape, Volvo is one of the passionate brands that’s worked hard to create something great in it. Even when stripped down to the most basic form and trim (T5 FWD), the S60 is an outstanding car.

If I were to have one complaint, it’s that the T6’s supercharger can have a bit of a tinny sound. But in all fairness, spinning at 24,000 RPMs, it’s the highest velocity unit Eaton has ever produced - and nothing is without tradeoffs.

There’s only two things on my wishlist: